Learn by observing - How do plants grow?

After a very long hiatus, we got back to doing an experiment!  It so happened that A was learning all about vegetables and planting at school, what with spring in full bloom all over. The school generally picks a book to read every week and there are activities built around it for the kids to enjoy and learn at the same time. The book this week was 'Jack and the Beanstalk'. So A came home every day of the week and taught me about stems we eat and roots we eat, how she planted parsnips at school but they wouldn't grow sooner :-( and I also got a detailed retelling of the classic fairy tale. They even made vegetable soup, which she was very enthusiastic about making and very clever about avoiding to taste!!

I asked A if she would like to see how the beanstalk grows from the bean. Since all the planting at school involved sowing seeds in the soil, I thought this would be a good idea to show her how exactly the plant begins to grow from the seed. A was, as usual, all enthusiastic and agreed right away. Before we sat to work and to give a certain, say, professionalism (ha!) to our exercise, I handed a Science Experiments Log Book to A and invited her to pen her observations and conclusions in it. I hope, somewhere in the long run, this exercise helps her to be organised and articulate in her thoughts and actions.

After some looking around online, this is how we started off -
We took a  regular ziploc bag and placed 4 kidney beans (rajma) on a wet tissue and covered it again with another one. I guess this will work with any kind of beans; we just picked what we had handy at home. We sealed the bag and taped it to our window.  We even drew clouds and a sun to show that water and sunlight are also required for plants to make their food and grow. 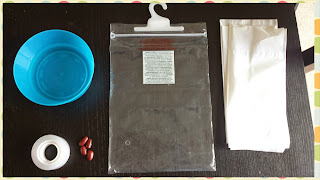 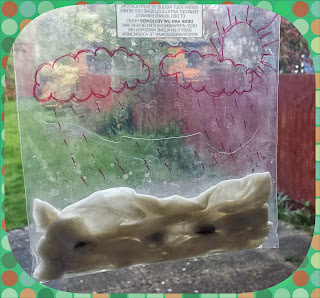 And we waited. We covered the experiment over a period of 15 days. After about 4 days a sprout appeared, followed in the next couple of days by what A called, 'baby roots'. After a week, there was an upward growth which A correctly said was the stem. She was excited now, because she knew this would be followed by leaves and increase in height. 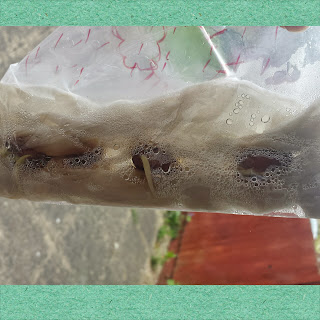 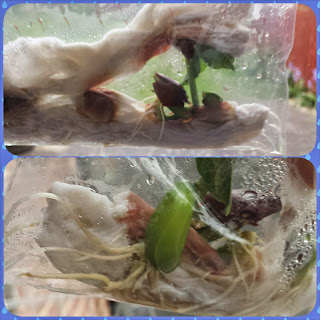 This activity gives a lot of scope for encouraging observation as there is slow and steady incremental change in the plant growth activity. A observed that there was a green bean 'born' out of the red rajma bean and it is from this that the plant was growing.

The leaves appeared soon enough and the plant showed a steady growth. We kept writing down our observations. This could also make a good start for some writing practice if your child is interested, because A writes tiny sentences once in a while and she did not mind doing the writing here as long as it wasn't too much. Because we intended to keep this as a record book for future experiments as well, I helped A with the spellings. 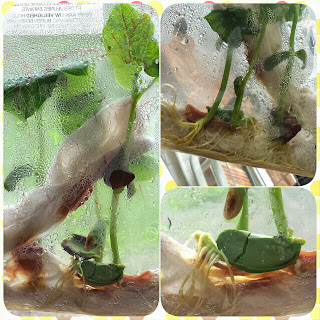 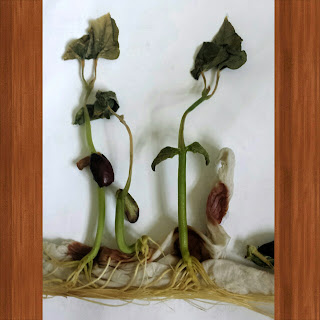 By the end of the 2nd week, the leaves were showing signs of drying because of the obvious shortfall of water and the lack of soil for the roots to derive strength from for further growth.  There were too many root growths and A mentioned that they looked like 'Rapunzel's hair flowing out of the window' (ya, she really cracks me up sometimes!). It was time to end the experiment and I explained to A that the plant has to be replanted in the soil in the garden which is a more natural habitat for it to grow further. And that's what we did.

And here are our observations! Ain't it all grand? :-) We concluded with a reading of 'Jack and the Beanstalk'. 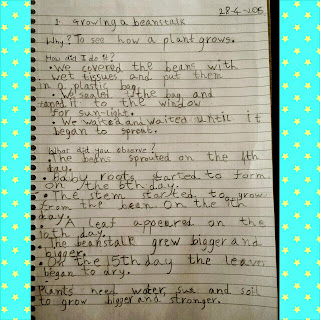