There are lots of experiments on this that you will find online, and very enterprising ones too! There are many enthusiastic parents and guardians, I must say! Most experiments that I saw online invoved even making the volcanic mountain from scratch - materials involved clay, dough, soil and containers, paper, foil or such other materials. I tried a short-cut version, one that did not involve a lengthy process of making the mountain but ensured total fun and learning.

My little A has been learning about volcanoes and tornadoes and our education sessions stretched from dramatic action sequences at home to You Tube videos. I finally decided to take it up another notch by doing this experiment at home. I liked the version of the mountain at this link here. They used easy tape to make the mountain and then coloured it brown; I cut the process further more by using brown duct-tape ;-)

What you need for this experiment -

I made the folly of not taking pictures from the beginning on how to make the volcanic mountain, but the link above will be able to guide you through it. In my version, though, I took a quarter plate  and placed a small plastic jelly container over it. I then took brown duct tape and started pasting lengthwise from the inside of the container to the base of the plate. This way, little by little I covered the entire build up so that it resembled a tiny mountain with a gaping hole at the top. This is how it looked - 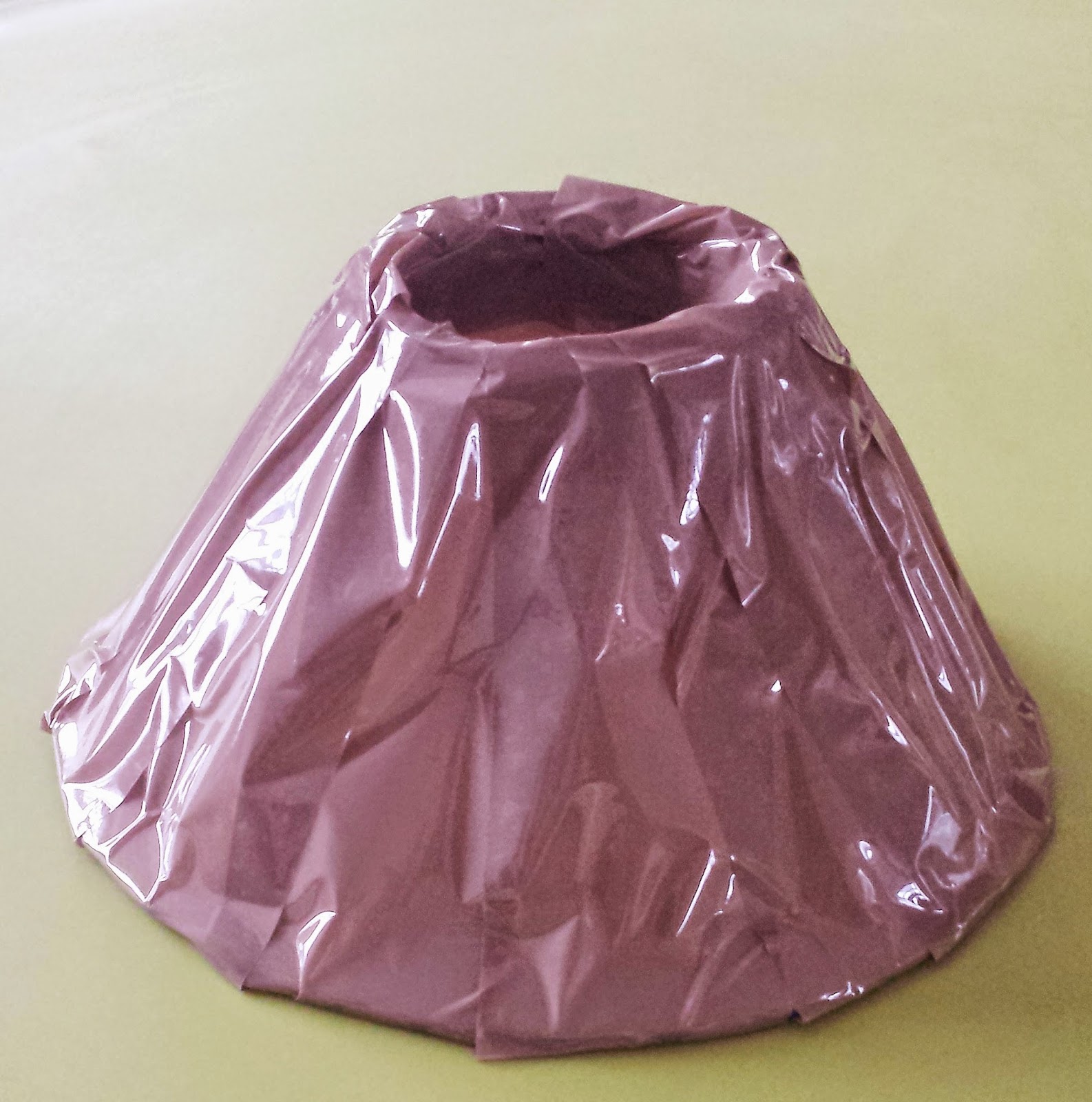 Pretty simple, though I apologise for not having pictures from the beginning. Once you are ready with this, all you need to do is put some baking soda inside and when your protege is ready to be amazed, pour the vinegar over the soda and W-A-T-C-H!

When vinegar comes in contact with the baking soda, it creates fizz and comes bubbling and fizzing up the top and overflows from the sides of the mountain, just like lava coming out of a volcano. I purposely used coloured vinegar at first to make it darker, but this came out like Coke ;-) 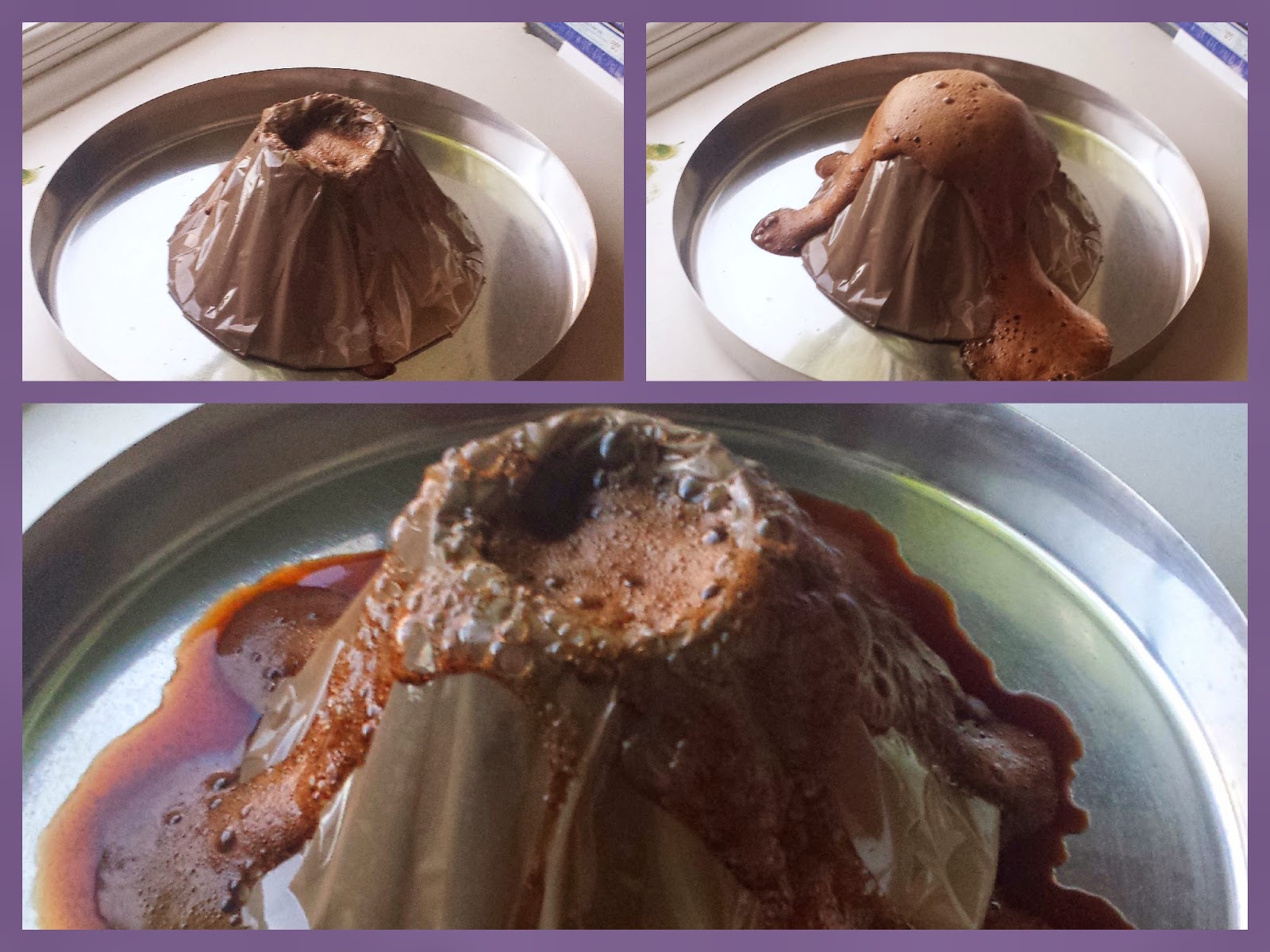 My little one screamed with glee when she saw the fizz all coming out; she was like, 'Amma, its hot lava!'. I believe she even backed off a bit to save herself from the deadly eruptions! Haha!

The second brainwave that I had was even more disastrous.. I used yellow food colouring thinking that the fizz might be the colour of molten lava, but it ended up looking like an egg yolk cooking! :-( 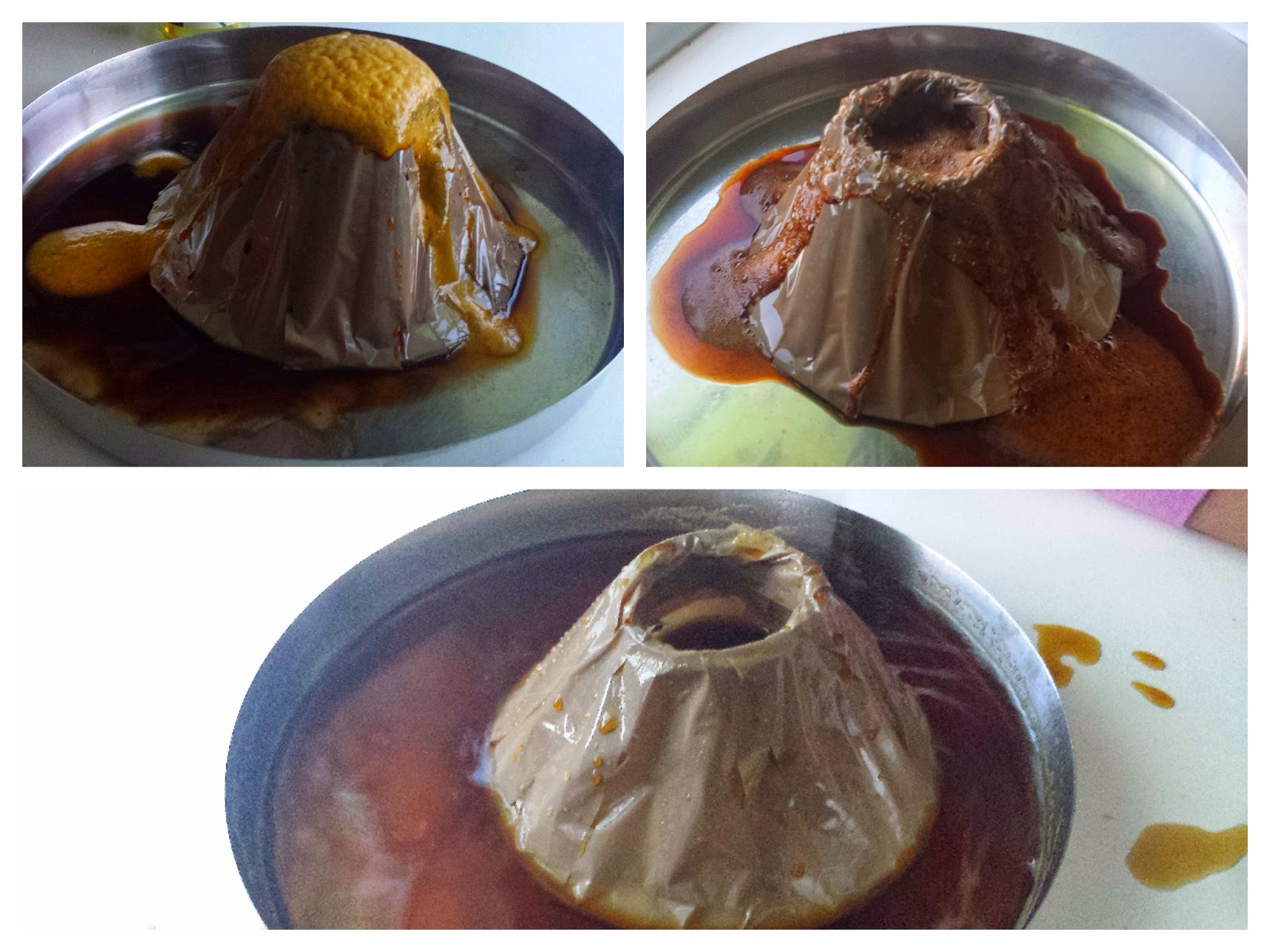 Moral of the story - use some shade of dark orange or red to get a colour that resembles molten lava. Definitely not yellow!

Now for some serious science - Acetic acid (vinegar) and sodium bi-carbonate (baking soda) come together and make carbonic acid. This acid breaks apart immediately into water and carbon-dioxide which creates all the fizz as seen above and ultimately trickles down as liquid.

It is a great fun experiment and informative at the same time. If you are doing this as a proper summer break activity, you can even make the mountain with green forests and brown soil with craft items; there are lots of ideas online that you can try. It would make for lovely quality time with your young ones. Its really fun while it lasts and even when it was over, A had some fun by herself with the mountain and the water. She messed up the table big time and as she was playing with it another idea struck me. The mountain covered by water all around reminded me of the Indian mythological story of 'Samudra Manthan' (churning of the ocean) where the demons and the gods churn the mighty ocean for nectar. Since A was also familiar with the story I asked her if she wanted to try churning our ocean. She nodded excitedly. Our serpent king, Vasuki, was a long, not-in-use USB cord which i coiled around our Mount Mandara! LoL! 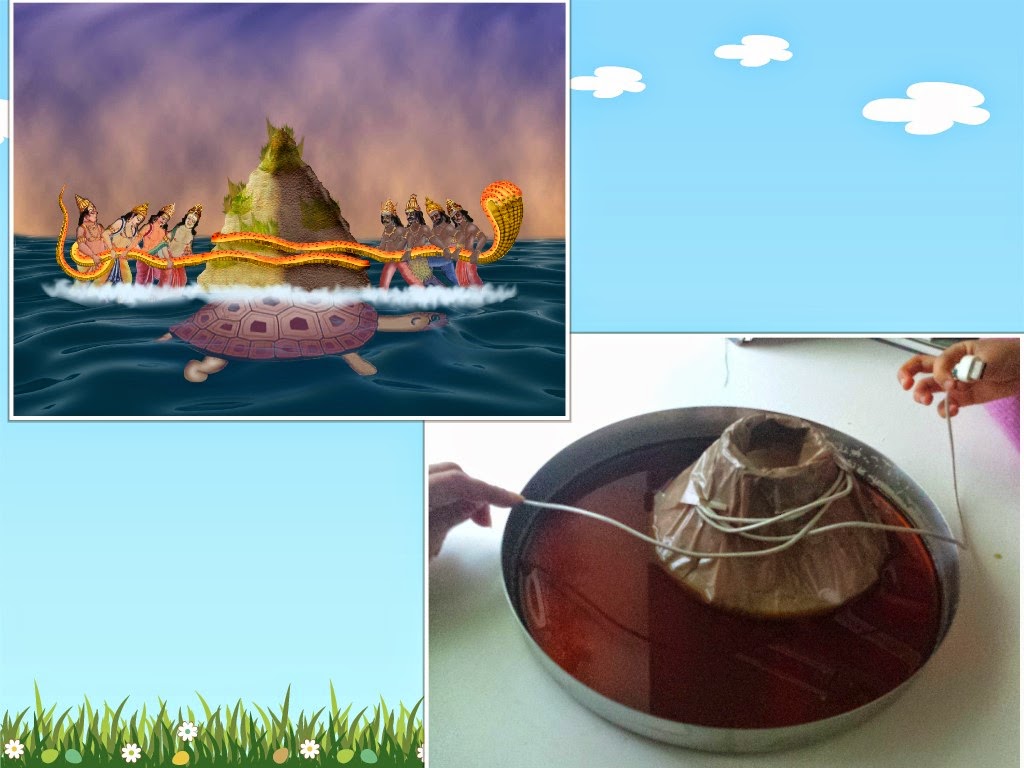 Science and mythology in one instance...now, isn't that a great idea? :-)
Posted by Unknown at 17:08