Yap, yappity, yapp... now that is something that I have a PhD in ;-) And I have great pride in announcing that A takes after me in that regard! Hahaha! She has always loved to listen to stories or hear them being read out to her (which kid doesn't?) and now she makes tiny stories and tells them to me first thing in the morning. She has decided that she wants to be a story-writer when she grows up! She takes keen interest in the author's and illustrator's name when we are reading together and recalls them when we read the book again later.

That is why when Little Readers' Nook (LRN), a themed reading and early literacy program in India specially designed for children in the age group of 2 to 6 years came up with a 'Tell A Tale' contest, I immediately discussed with A. She was a little confused with my explanation, but she agreed to play along when I said that she will get to live her dream of being a story-writer!

The contest was for the whole month of April 2014 and we could send in as many entries as we wanted to. LRN provided PDFs of the characters, props and settings that we were allowed to use for the exercise. The pictures that were given were - 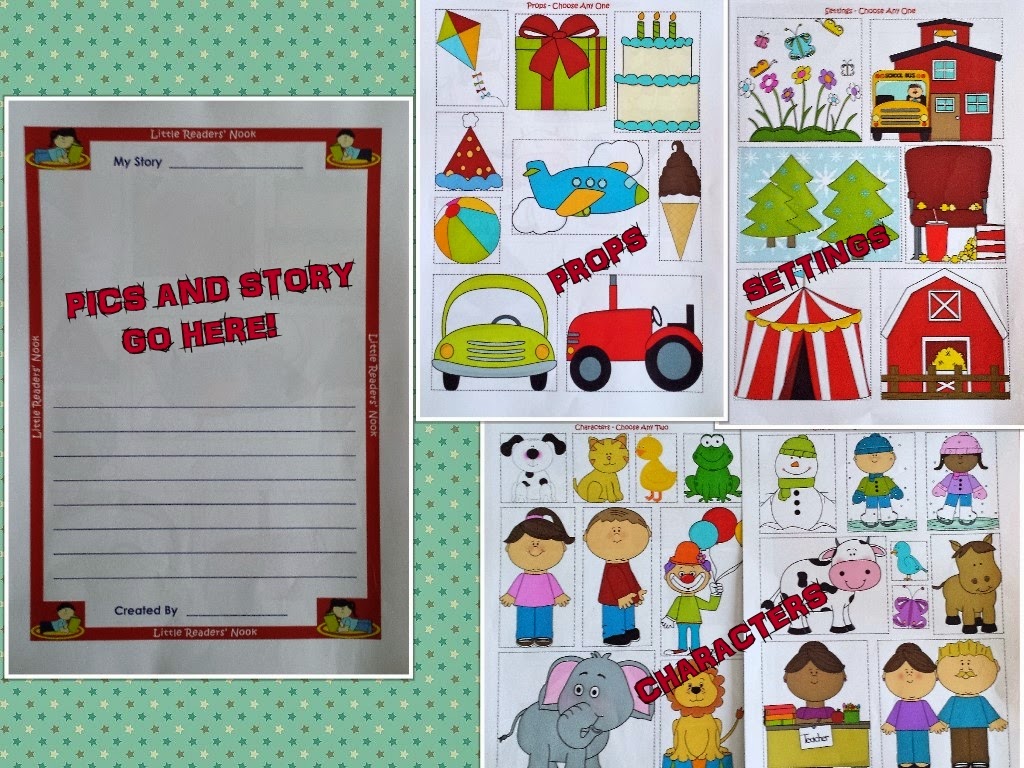 To spin a tale, we were to pick one setting, 2 characters and one prop. We were not to include any other characters or props, but we were dealing with pre-schoolers here, so there was no fixed rule. When we started off, A also  added characters, but as we progressed, she understood the activity. Though she limited her story to the characters and props involved, the length of the story was a big problem - my chatterbox just couldn't put an end to the story!

I have attached a few stories that we wrote. It was an effort for me to not poke my nose into her story to improvise or try to give ideas. It seems like a task to get your little one to make stories without any help. But you will be surprised - they manage very well. After all, it is an exercise in using imagination, why wouldn't they? The stories here are completely hers and at most, I have, at places, only tweaked the sentences in the end to complete the story within the page. 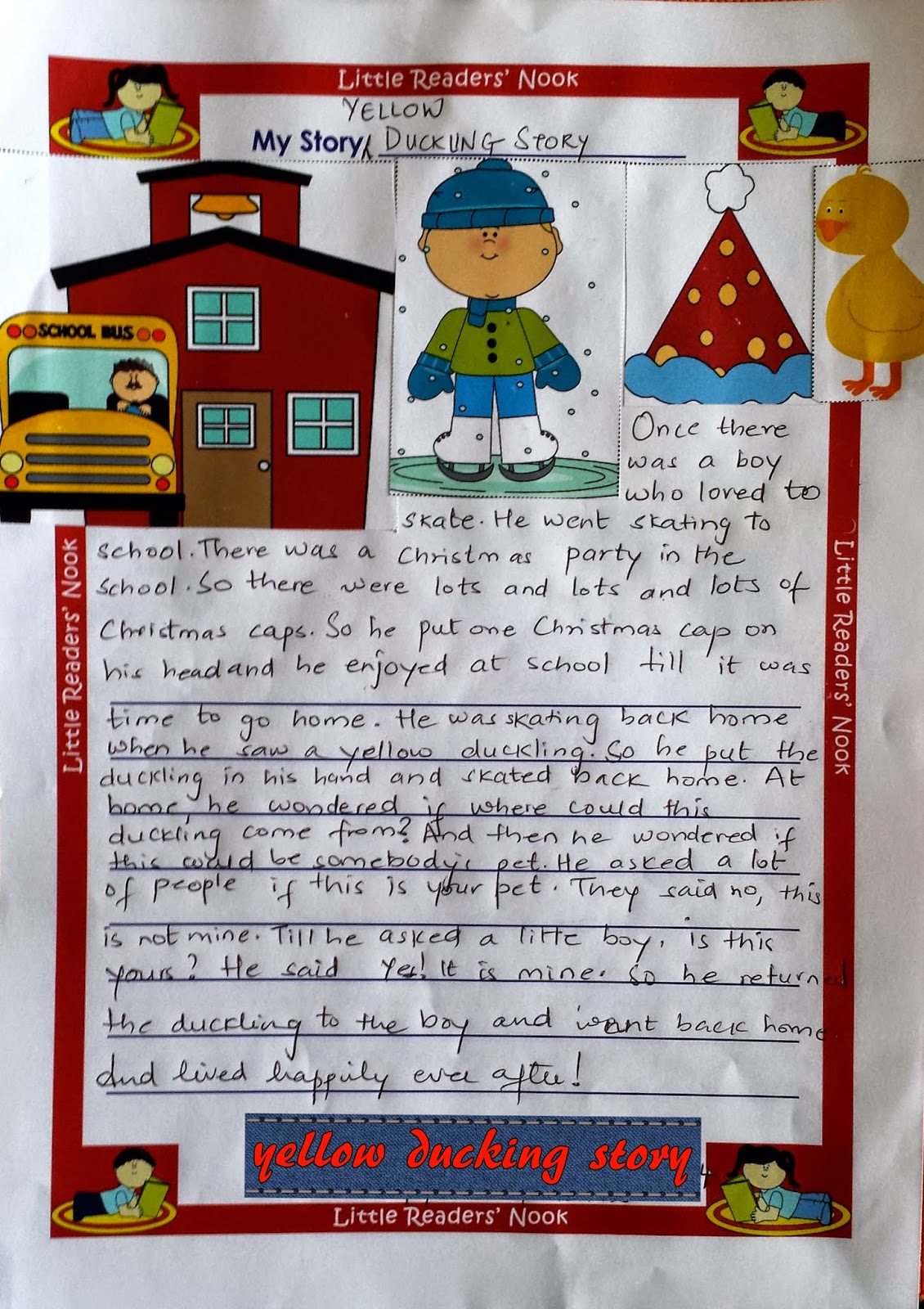 Once there was a boy who loved to skate.  He went skating to school.  There was a Christmas party in the school.  So there were lots n lots n lots of Christmas caps.  So he put on one Christmas cap on his head and he enjoyed at school till it was time to go home.  He was skating back home when he saw a yellow duckling.  So he put the duckling in his hands and skated back home.  At home, he wondered if,  where could this duckling come from?  And then he wondered if this could be somebody's pet.  He asked a lot of people if this is your pet.  They said no,  this is not mine.  Til he asked a little boy, is this yours? He said,  yes it's mine.  So he returned the duckling to the boy and went back home and he lived happily ever after!

I loved the way she thought of the boy going to everyone asking if its their pet. Sweet! 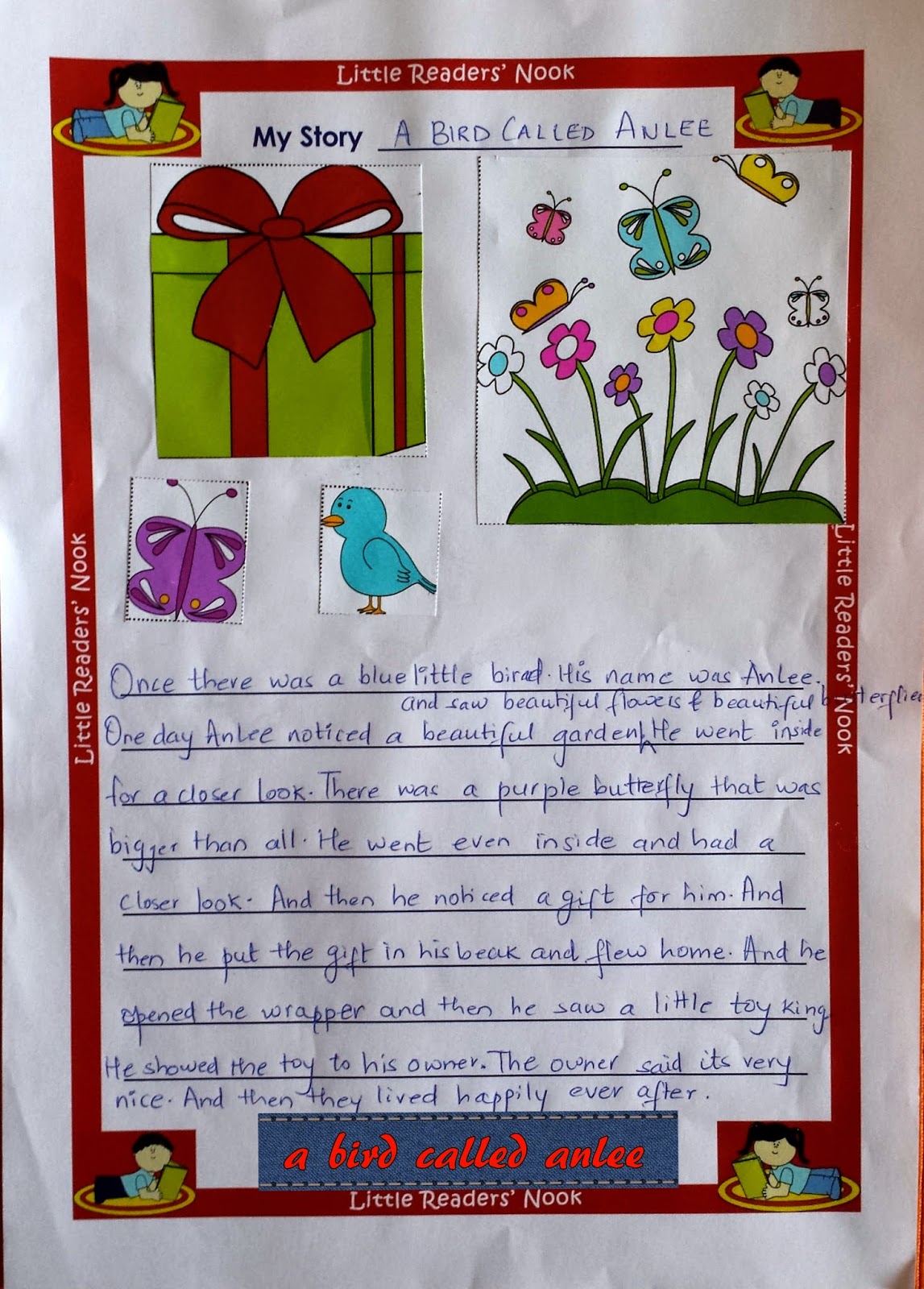 Once there was a blue little bird. His name was Anlee. One day Anlee noticed a beautiful garden and saw beautiful flowers and beautiful butterflies. He went inside for a closer look. There was a purple butterfly that was bigger than all. He went even inside and had a closer look. And then he noticed a gift for him. And then he put the gift in his beak and flew home. And he opened the wrapper and then he saw a little toy king. He showed the toy to his owner. The owner said its very nice. And then they lived happily ever after.

I was actually confused about her choice of pictures here, but she managed a good story, I thought! This is another observation - because kids dont have any pre-conceived notions, they can imagine anything and spin a story anywhere! :-) 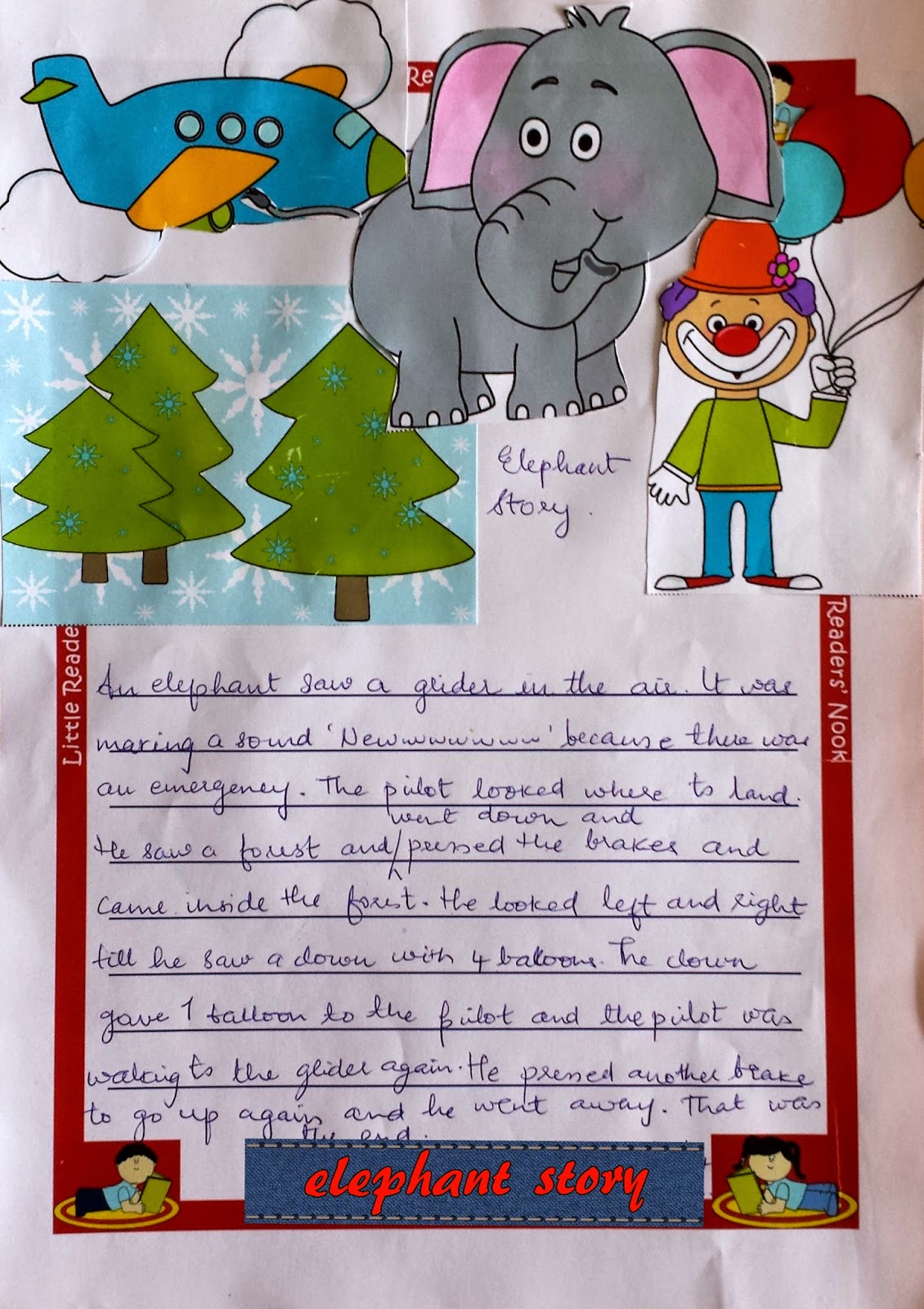 An elephant saw a glider in the air.  It was making a sound 'Newwwwwwwww' because there was an emergency.  The pilot looked where to land.  He saw a forest and went down and pressed the brakes and came inside the forest.  He looked left and right till he saw a clown with 4 balloons.  The clown gave one balloon to the pilot and the pilot was walking to the glider again.  He pressed another brake to go up again and he went away. That was the end of the story.

This was a new word that she had learnt -'emergency'. And I also liked the idea of 'brakes' in an airplane. :-) 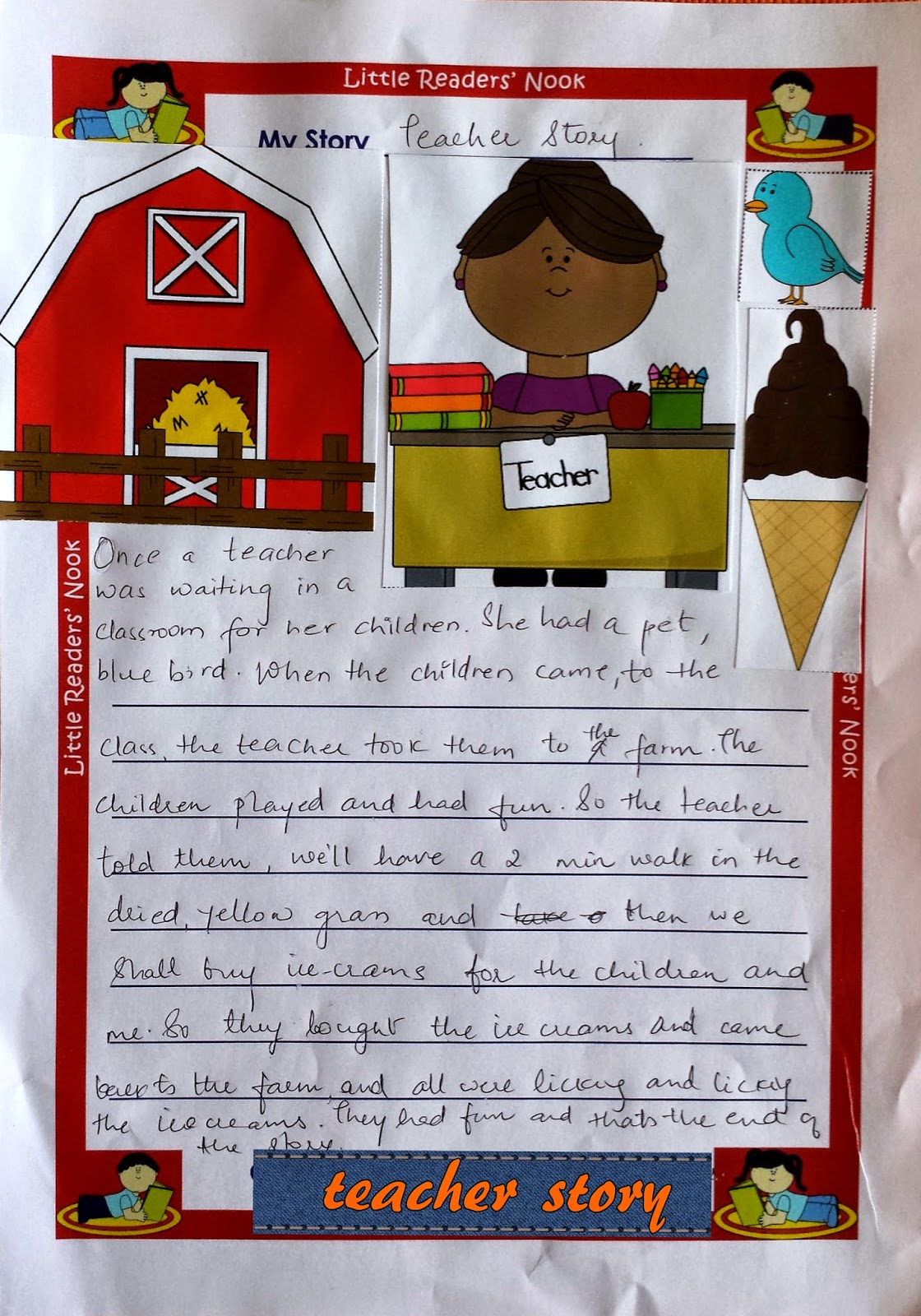 Once a teacher was waiting in a classroom for her children.  She had a pet,  a blue bird.  When the children came to the class,  the teacher took them to a farm. The children played and had fun.  So the teacher told them,  we'll have a 2 min walk in the dried,  yellow grass and then we shall buy ice-creams for the children and me.  So they bought the ice creams and came back to the farm and all were licking and licking the ice creams.  They had fun and that's the end of the story.

Basically, she did not come around to the word, 'picnic' but managed a story similar to a picnic day. 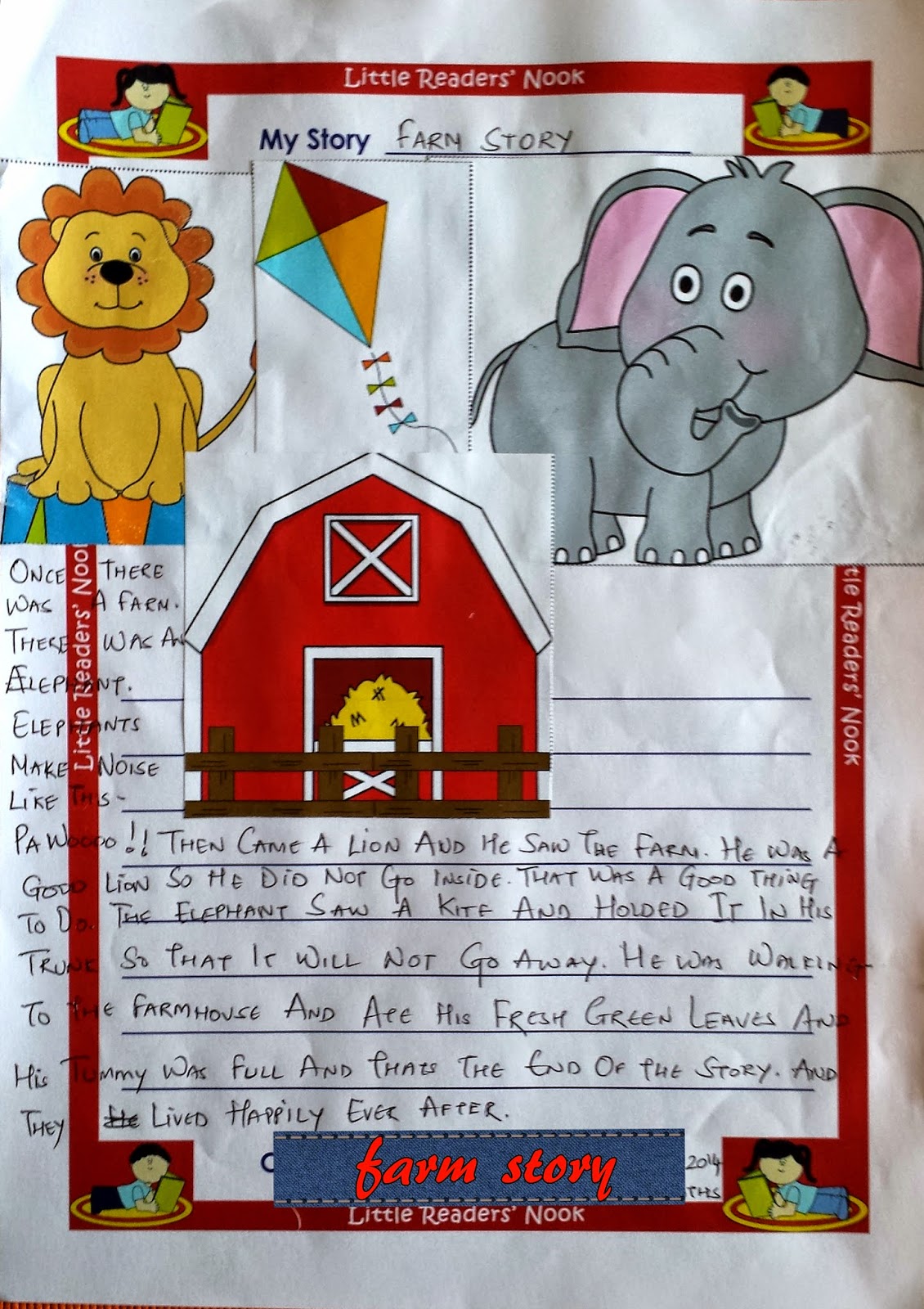 Once there was a farm. There was an elephant.  Elephants make noise like this - PAWOOOOO!  Then came a lion and he saw the farm.  He was a good lion so he did not go inside. That was a good thing to do.  The elephant saw a kite and holded it in his trunk so that it will not go away. He was walking to the farmhouse and ate his fresh green leaves and his tummy was full and that's the end of the story.  And they lived happily ever after.

The lion did not go inside and that was a good thing to do! Indeed! Kids surprise you with their thoughts, really! :-) 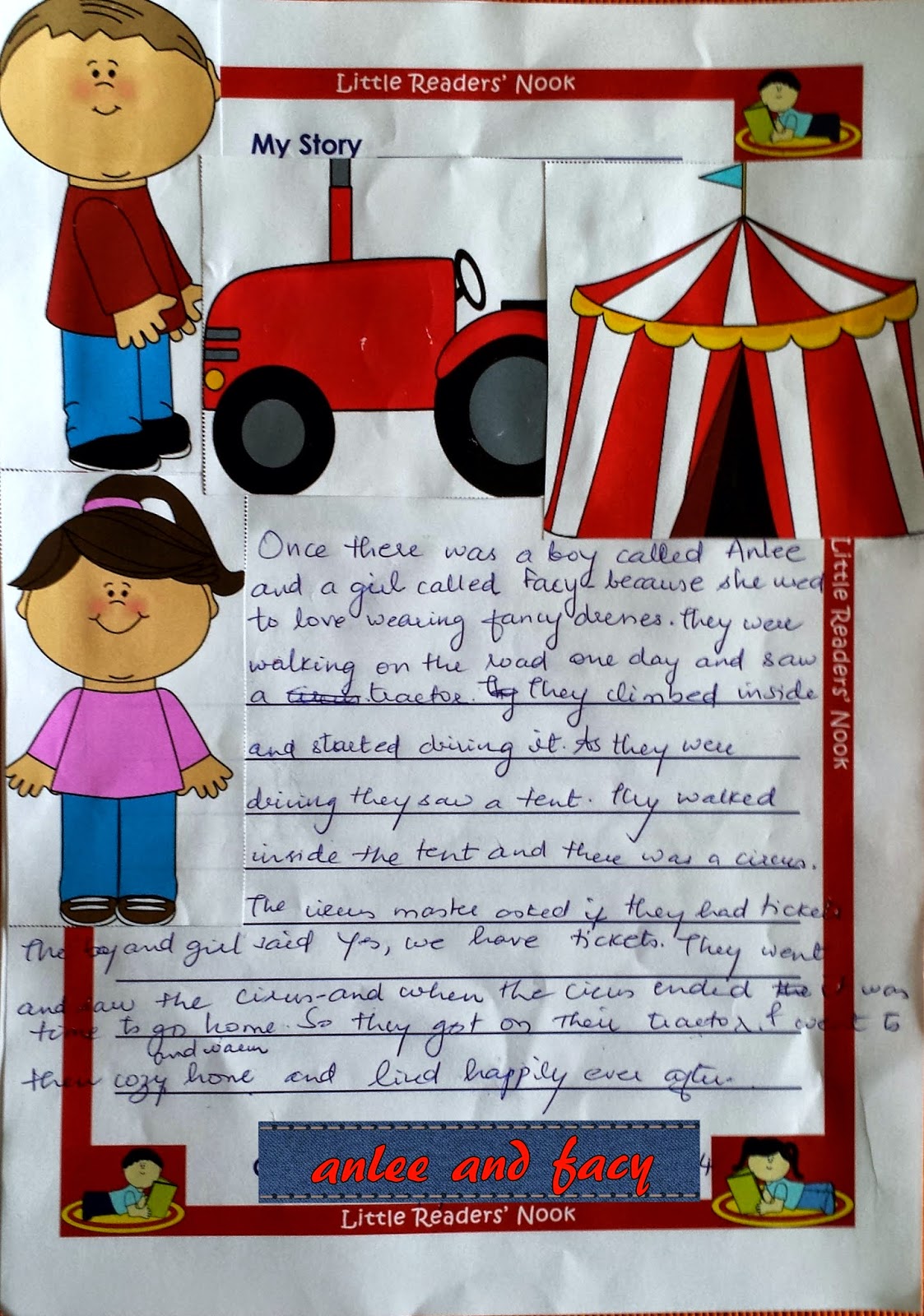 Once there was a boy called Anlee and a girl called Facy, because she liked to wear fancy dresses. They were walking on the road one day and saw a tractor. They climbed inside and started driving it. As they were driving they saw a tent. They walked inside the tent and there was a circus. The circus master asked if they had tickets and the boy and girl said Yes, we have tickets. They went and saw the circus and when the circus ended it was time to go home. So they got on their tractor and went to their cozy and warm home and lived happily ever after.

The girl was called Facy, because she liked to wear fancy dresses! I was impressed :-) 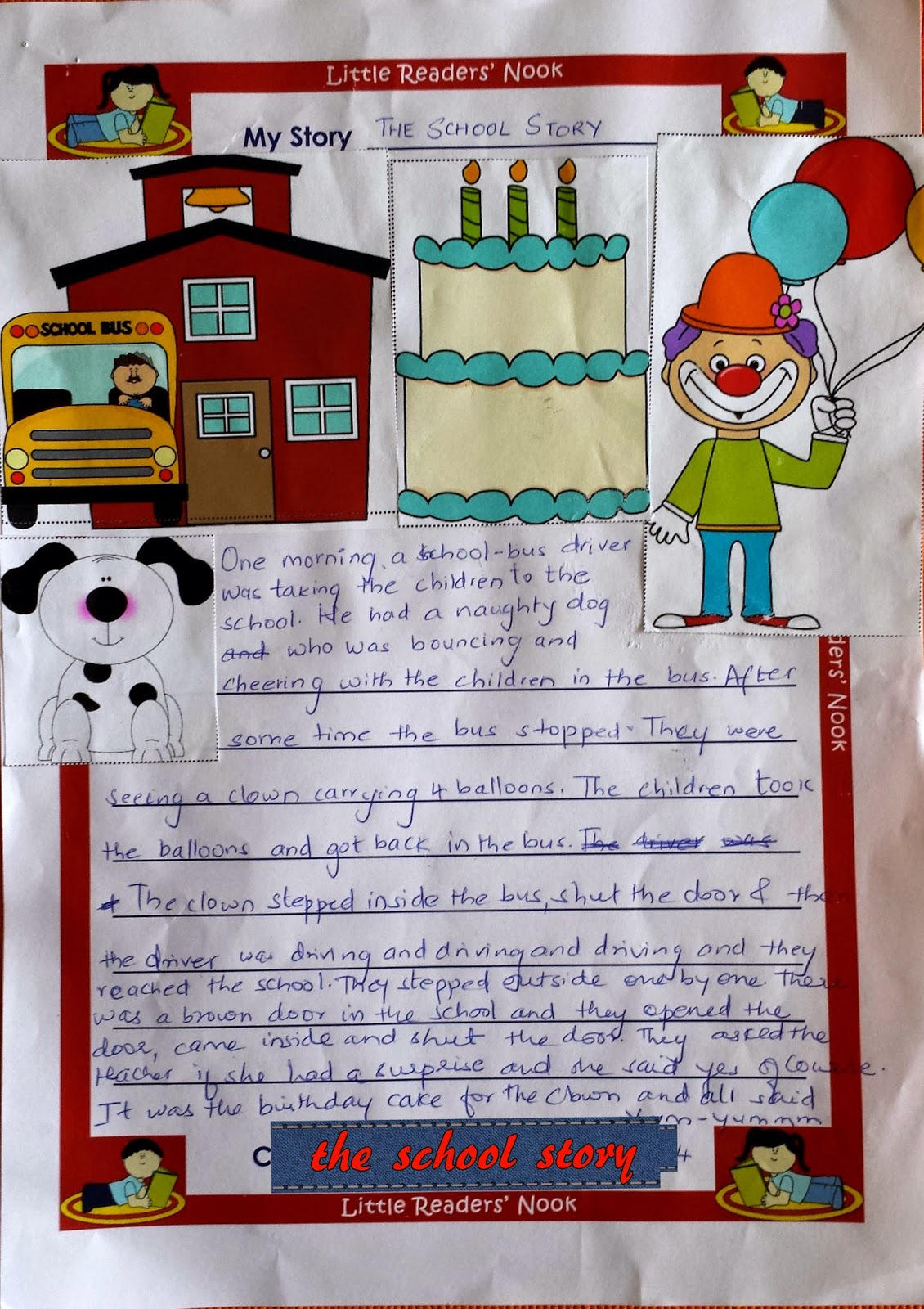 One morning, a school bus driver was taking the children to the school.He had a naughty dog who was bouncing and cheering with the children in the bus. After some time, the bus stopped. They were seeing a clown carrying 4 balloons. The children took the balloons and got back in the bus. The clown stepped inside the bus, shut the door and then the driver was driving and driving and driving and they reached the school. They stepped outside one by one. There was a brown door in the school and they opened the door, came inside and shut the door. They asked the teacher if she had a surprise and she said 'Yes ofcourse'. It was the birthday cake for the clown and all said yumm--yummmmmmm.

You can see how I struggled with the length - this was the first story we did! The attention to detail - opened the door, came in, shut the door. Though I hated to interfere, this was an instance where I had to butt in and ask her to not get into basic details.

There are a number of obvious advantages to such an exercise - building vocabulary, sentence formation, grammar, imagination. Though we start off as getting into a fun, parent and baby bonding time activity, you will start noticing the above changes slowly and steadily. I have not taken all the stories that A and I did together, but only some and I could see a lot of change in the way she formed her sentences. For example. it became evident to me that detail was of importance to her - her sentences are always complete, as if she does not want to leave anything to the readers' imagination. She also loves to use newly learnt words in her sentences. This is an observation that I have received from her school as well - that she loves to articulate and expresses herself well. I have written the story as narrated by her, without any grammatical corrections or help in sentence formation. Her love for reading is also apparent in the way she forms her sentences.

This is a great activity that I would recommend in the 3+ age group. Not only is it fun, it also gives you other benefits as above over a period of time. I am already excited thinking about when A is all grown up and I get to show her these stories that she made when she was 4! What fun!! :-)

We thank Little Readers' Nook for this wonderful opportunity offered to encourage imagination and sentence/word building skills. It is a wonderful idea and was great fun for us!! :-)

Little Readers' Nook also offers subscription-based book delivery service across India and story sessions too. For more details, please check out the official site at Little Readers Nook. The work done at LRN is greatly commendable ( long required in India in the world of reading picture books!) and something that we highly recommend.